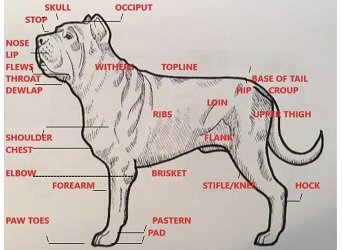 When your dog occiput is getting bigger,  don’t take it lightly. It may be pretty harmless but that bigger occiput is not going to be vanished by itself. So make a trip to veterans because, in reality, your dog may need help. This can be an alarm for possible health threats.

What is an occiput on a dog?

A dog occiput acts like a protective shield for its brain and skull. When predators fight they attack each other’s heads. Dog’s occiput helps in protecting its skull and brain. This bone is clearly seen in some dog breeds and may be less visible in others.

In reality,  this is in a dog’s anatomy to save it from possible dangers of head accidents or skull crush. ( Evolution taught us how species evolved and developed anatomy that protected them from possible dangers in their ecosystem. Dogs back then were not that safe as they are now and their ancestors were predators). So we guess bigger and fighter breeds like bloodhound and Labrador will have more visible occiput than others. (well they actually have)

Dog occiput is known by different names like wisdom bump,  cone head, or jumpers bump. This is also the head area where all the nerves end so giving your dog a head massage in this area will do wonders for its mood.

As this depends on the dog’s breed so in general don’t compare the size of occiput in different breeds. However,  if your dog is having a  noticeable increase in its occiput and you can say that it was not there “before”, talk to your veteran.

Dog breeds with the bigger occiput

There are dog breeds that have visible jumper’s bumps. Male dogs usually have larger occiput than female dogs. Also,  some dogs have bigger occiput at a younger age and by the time they reach maturity,  the size of their head becomes normal.

Some breeds like Labrador and boxers have naturally prominent occiput which gives their head a cone shape. Other breeds could be golden retrievers, bloodhounds, pointers,  German shepherd,  Doberman,  collies, or spaniels.

Does prominent occipital bone in dogs indicate a health problem?

Not always. As we have mentioned that it could be very normal for dogs to have bigger occiput but in some cases, it needs attention too. If you notice other symptoms along with a dog’s bigger occiput, seek the vet’s help.

The odd symptoms may include

As occiput is directly related to nerves and head muscles,  any problematic situation will affect the head and its function. These muscles help the dog to move its neck so, in case of illness,  your dog will not be able to move around his head.

Why does a dog occiput is getting bigger?

A dog’s occiput can grow large from its normal size and this can be alarming in some situations.

A dog occiput can get bigger

If your dog is injured,  the bruising can make the occiput look bigger than normal. Look for swelling. If it’s not going even with proper care, talk to a vet.

Understand this as sometimes when we get a bump somewhere and get swelling,  this can happen in dogs also. Swelling in muscles can cause the occiput to look larger.

In adult age,  the muscle size decrease. The occiput is covered with muscles. With passing time and muscle atrophy, the bump may become more visible than normal. Also, with aging, dogs’ hair falls out causing the bump to be more prominent.

This is a serious immune disease in dogs where jaw muscles get infected and your dog will face difficulty in chewing, barking, etc. The dog’s immune system,  attacks its cells making its body realize that jaw muscles are a threat to the body.

In this condition, the dog needs your special attention. Although the recovery is not impossible but it’s hard on your pup. Your dog can get visibly weak due to less food intake. It may need to be fed on liquids only. And since it is an inflammatory disease,  it may cause pain and swell too.

In the early stages,  this can be treated. Masticatory muscle myositis is diagnosed through biopsy or blood test so it’s important to see a vet as soon as you notice symptoms. If not treated on time,  MMM can transform into cancer making your dog seriously sick. In general, dogs having MMM has an expected age of three years.

As this head area is also linked to the spine so having this disease makes it difficult for a dog to move or turn head. As muscles can get stiff due to MMM so your dog’s eye may appear sunken.

Dogs can have birth defects too. They may be born with occipital bone malformations. This will lead to other severe medical conditions and syndromes. The symptoms of occipital bone malformations will show within 6 months to 2 years of age. So if your pup is above 6 months and still has bigger occiput, this can be a dangerous health threat. Neurological symptoms may be seen later in life, causing movement dysfunctions in dogs.

If your dog has bigger occiput and scratches its shoulder often it could be a sign of occipital bone malformation.

What to do when you notice a swollen occiput in a dog?

First of all, don’t worry. Then thoroughly investigate if the matter looks serious. Normally, when you caress your dog,  you feel that hard bump on top of the dog’s head. It can get bigger. In adult dogs, occiput can be visible due to muscle atrophy but if it’s a young pup or the bump is unusually bigger than normal, take professional help. Talking to your vet will be in the best interest of your pup. The Sooner the matter clears, the better it be.

We suggest, before or after adoption, satisfy yourself first. Look for the head area if it has something odd(like two lumps). If it’s a young pup the occiput will go away with time but still talk to your veteran on the first checkup.

How to get my dog’s head bigger?

Because people also link smartness with a cone head. They think that dogs having bigger occiput are smarter than others but this is not true. Smartness is rather a general term and there is no definitive measure or standard for it.

Variant breeds serve humanity differently. Some dogs may be good fighters while others may be obedient ones. Others learn tricks fast and some run like a pro. Smartness is not linked to being cone-headed.

At the safe side, we can say that dog who “needs” to be more protected may have larger occiput in their anatomy. But you can’t classify a dog’s smartness by the size of its occiput.

Is massaging your dog’s occiput ok?

Massaging a dog’s occiput will relax its muscles and increase blood circulation. To massage a dog’s occiput,  gently caressing its top head will do the job. Your dog deserves that little chumpy session to freshen up. Well, massaging the occiput doesn’t have any bad effect on dogs. However,  if you notice any hard bump or two lumps on the area,  you need to take your dog for a further checkup.

In short,  dogs can have bigger occiput without any reason or simply because they belong to a breed with the bigger occiput. So unless your dog shows serious symptoms this is not an issue.